Previously, I proposed a Medium-Weight Cruise Missile designed for use against smaller surface combatants, based on the ADM-160B - Miniature Air-Launched Decoy (MALD).   This could be carried by helicopters and fighters in greater numbers to deal with numerous Chinese small combatants.

Here, I propose a somewhat larger missile, the Quad-Packed Cruise Missile (QPCM), with a focus on land attack.  Obviously, from the name, it is still intended to fit quad-packed in an Mk41 or Mk57 VLS cell, but growing beyond the MALD airframe allows us to develop a larger, more capable munition.

Target set for this munition is the same as SDB I (and eventually SDB II): 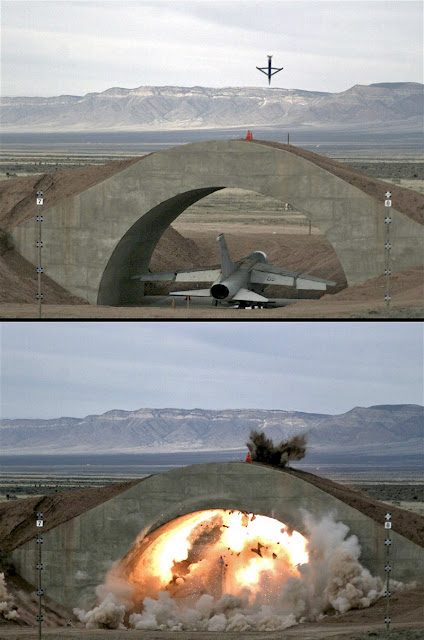 Additionally, the warhead should be capable vs ships, though its small size means it would require multiple hits to disable or sink a large warship.  Even so, an SDB-sized warhead is around the same size and weight as an 8" armored piercing projectile but with ten times the bursting charge (8" Mark 19 AP projectile HE weight - 3.64lbs.  SDB HE weight - 36lbs).

This weapon would allow warships to quadruple their stowed shots per VLS cell.  An air dropped variant could be built later.
The IAFM Frigate Arsenal Ship (FMG), with 384 VLS cells devoting 320 to strike weapons could split these evenly between full-sized NGCMs and QPCMs.  This would increase the total number of strike weapons to 800 (160+4*160).  A full squadron of four FMGs could have as many as 3,200 strike weapons, or nearly 2,000 more than a squadron carrying NGCMs alone.
As the SDB has shown, many land-based targets can be service more efficiently with more numerous, accurate hits, rather than fewer, larger hits.  An airfield, for example might require as many as 50 or more aimpoints struck, however destroying the aircraft in a hardened shelter doesn't require a 1,000-2,000lb warhead.  The 250lb SDB warhead is sufficient.  It does require significant concrete penetration.
For example, a common, hardened airfield might require as many as 51 SDB-sized hits to disable.

How much effort is required to disable a typical PLA airbase equipped with an underground hangar? This chart presents a hypothetical targeting model for such a base, assuming the use of the GBU-39/B SDB and GBU-57A/B MOP. No less than 51 SDBs are required cover key airbase facilities, and two MOPs to defeat the underground hangar system. While the MOP requires the use of the B-2A, the SDB could be delivered by both the B-2A and the F-22A. No less than seven F-22A sorties would be required to deliver the required number of SDBs. Forty such bases would require forty-fold the number of weapons delivered (S. O'Connor).

Obviously neither the QPCM nor the NGCM have MOP level penetration or destructive power.  These could be augmented with carrier-launched MOCMs for super-hardened targets.

Airfields would need to be re-struck every couple days, or even multiple times per day, to keep them out of action, with at least 11-16 munitions needed to cut the runways.

Given that there are 40 odd Chinese airfields within range of Taiwan, many of which are hardened to various degrees, the ability to strike numerous airfields from FMGs within hours or days of the start of a conflict could significantly blunt Chinese offensive operations.

The FMG squadron of four ships mentioned above could hit the 40 airfields with 50 munitions each (combination of NGCMs and QPCMs) and still have 1,200 munitions left.  That's enough to hit each airfield's runways twice more.

The QPCM trades target effects against large infrastructure targets and warships for x4 as many missiles per VLS cell.  A combination of QPCMs and NGCMs greatly increase the number of stowed shots per ship, while still providing for some NGCMs to hit targets that require their large warhead.