Short of nuclear weapons, there are certain military targets that simply demand a Really Big Bomb (RBB).  Smaller ordinance just won't do.  And not just any RBB, such targets require a bomb with considerable earth and concrete penetration.  These targets include super-hardened airfield hangars; submarine pens; command and control facilities; and WMD storage, research and production facilities.

From Effects of Nuclear Earth-Penetrator and Other Weapons on Strategic Hardened and Deeply Buried Targets,

There are other targets that may not require such high degrees of penetration but may be effectively struck with a RBB, like large railroad bridges and damns.  It could take five or six 2,000lb class weapons to drop a bridge, where a single RBB might do the job.

Lastly, the Navy and Marine Corps has investigated using really big bombs to clear a surf zone and beach of obstacles and mines in preparation for an amphibious assault.  The idea is to essentially drop several RBBs in a line and detonate them simultaneously to throw mines and obstacles out of the way and create what amounts to a safe zone all the way through.


To hit these  some of these targets today, we have heavy bombers carrying the GBU-57A/B Massive Ordnance Penetrator (MOP).


Given "only" 40-60m of earth penetration, MOP clearly can't hold at risk all of the HDBTs outlined above, but it can still be used to collapse entrances.

The problem with MOP is that it requires a B-2 to carry it.  The forthcoming B-21 Raider may also be able to carry one, but little information is available on its capabilities.   We only have a handful of operational B-2s and no operational B-21s, so our ability to deliver this type of effect is extremely limited at present.

Delivery of MOPs by B-2/21's requires the aircraft to fly almost directly over the target, as MOP has a limited standoff range.   This forces the bomber to fly deep into heavily defended airspace.

Develop a large, fighter-sized, cruise missile called the Massive Ordinance Cruise Missile (MOCM) that can either take off directly from an airfield or catapult launch from an aircraft carrier and carries a single warhead of MOP-level penetration.  The Air Force plans to eventually replace the 30,000lb MOP with an advanced, ~10,000lb weapon with similar capabilities, called the Next-generation Penetrator Munition (NGP).   MOCM would carry a single NGP internally.  Ideally MOCM would have a range of at least 1,500nmi to allow it to hit targets deep within mainlaind China.

Stealth is obviously mandatory to give it a reasonable chance of penetrating defenses.  Terminal penaids such as chaff, flares and jamming may be required at the target.

MOCM could be around the same size and general configuration as the Northrop Grumman Tacit Blue aircraft, with foldable wings for carrier stowage. 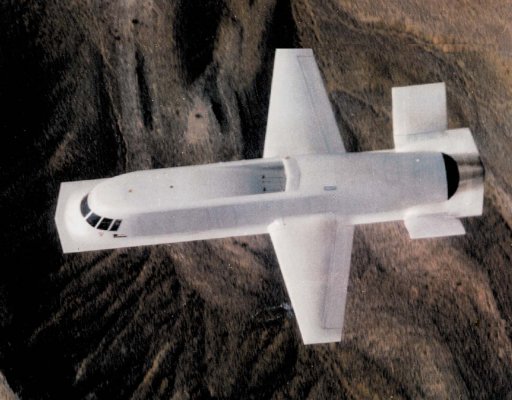 MOCM has non-retractable, but jettisonable, landing gear and tail hook, allowing it to take off and land like a traditional aircraft.

However, we need to be careful and avoid turning this into a reusable system, which would greatly drive up unit price and drive down expendability.  It's a missile, not a UCAV.

A few MOCMs could be carried by a CVN, tucked away in the corner of the hangar for when they're needed.  Or, they could be flown out to the carrier from land-based storage areas, unarmed, and mated with their NGP warhead on the ship before being re-fueled and launched to their target.

Given enough land- and sea-based MOCMs in theater, we could strike every enemy super-hardened facility simultaneously, at the beginning of the conflict, rather than the slow pace of using our handful of B-2s once every other day, or every third day, from CONUS or distant forward bases.

Follow-on MOCM payload could include: