Showing posts from January, 2021
Show all

M1-based HAPC The existing Army Brigade Combat Team organizations contain a variety of infantry carriers, from un-armored trucks to Strykers and Bradley Fighting Vehicles.  However, none of them match the protection of an MBT.  Aggressive use of these vehicles in high-intensity/high-threat situations, such as urban combat against well equipped enemies, could lead to catastrophic losses.  Assaulting a prepared enemy position, where the enemy has a large number of anti-armor munitions is a very dangerous proposition in a Bradley or Stryker.  Both will require their infantry to dismount well before the objective and approach on foot, negating the closing speed afforded by vehicles.   The Army attempted to remedy this with the Ground Combat Vehicle (GCV) program.  This program envisioned an MBT-sized vehicle carrying a full squad, with high levels of all around protection.   However, it was canceled due to the forecast high cost. GCV (Notional - BAE) Solution I propose we dust off some of
Post a Comment
Read more 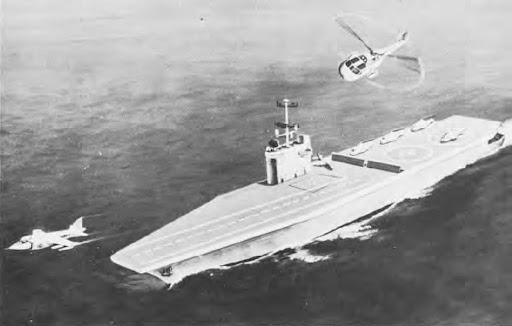 “Economy of Force: Allocate minimum essential combat power to secondary efforts.”  -US Army Field Manuel 3-0, Operations, 2001   The IAFM includes two aviation ships: the large, 70-80,000 ton conventional carrier (CV55) and the smaller, SC-150-based CVL-150.  In the Battle Force 2045 version of the IAFM, I include sixteen CVL-150s and sixteen CV55s.   Small carriers have a long history in the USN, but fell out of favor after the retirement of the WWII-era CVE and CVL classes, and the LPH amphibious assault ships.  There were various attempts to resurrect the small carrier throughout the years.  Perhaps most notably was the Admiral Zumwalt-era Sea Control Ship in the 1970s. By U.S. Navy - Original: Naval Aviation News, March 1972, p. 42 and Additional: GlobalSecurity.org, Public Domain, https://commons.wikimedia.org/w/index.php?curid=8094777 This design was never built for the US Navy, but it was sold to Spain and Thailand, who built the Príncipe de Asturias and  HTMS Chakri Naruebet .
Post a Comment
Read more
More posts