This version of the IAFM is sized to correspond to the Navy's Battle Force 2045 and "355" fleet designs.  As such, it is more expensive than our existing fleet design, or the recent Hudson fleet design.
The IAFM is broken down into categories of ships: Aviation, Subsurface Combatants, Large Combatants, Small Combatants, and Logistics & Auxiliaries.  Each section lists the steady-state count of each ship type, a notional "First In Class" cost, a discounted unit cost that applies a learn factor and build rate discount to generate an average cost, a service life of each ship in the class, and the resulting build rate.  I also include a notes column that describes roughly what each type of ship is.

The IAFM has a LOT of carriers, 32 to be exact. It can get away with this by ditching both the medium-sized LHAs and LHDs and the very expensive, nuclear powered CVNs.

The primary carrier is a ~70-80,000t, conventional, CTOL carrier designed around carrying roughly 55 aircraft (hence the name, CV55).  In contrast, the current, nuclear-powered, Nimitz and Ford classes which are designed to carry roughly 75 aircraft.

Two examples of ships in this range,

The first in class costs for the CV55 is estimated at $8.5 billion.  This estimate comes from a briefing on the CVN(X) and LHA(R) Analysis of Alternatives with the following slide: 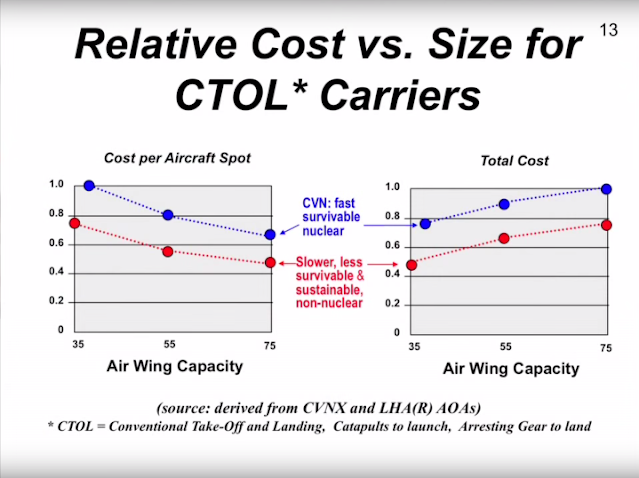 The IAFM second carrier is a small, 15-20,000t STOVL carrier.  It's designed to carry around 12-16 F-35Bs, or a mixture of helicopters, UAVs and F-35Bs.  It harkens back to the Sea Control Ship concept, with the Spanish Príncipe de Asturias as a reasonable approximation.

It's hull, propulsion and core systems are based on the common Surface Combatant 150 (SC-150) family of ships to save costs.

Both carriers can double as Landing Platform Helicopter ships (LPH).  This obviates the need for separate classes of big-deck amphibious ships in the IAFM.

Admittedly, carriers operating in this swing role won't be as effective as purpose-built amphibious ships, though you can put a lot of Marine or Army aviation on a big-deck carrier.  The CVL-150 is roughly the size of an Iwo Jima-class LPH.  However, neither is designed with a well deck, and they are not expected carry significant amounts of Marine or Army equipment.

I expect in practice, given the number of carriers and the Marine's push for smaller, more distributed operations, mixed air wings of Navy and Marine aircraft may predominate most deployments.

50 SSNs and 50 SSKs compose the attack submarines in the IAFM.

The IAFM continues development of the Virginia-class SSN but eliminates the Virginia Payload Module.  This module adds a half billion to the price of each sub.  For the IAFM, I'd rather have more subs than more VLS cells.  The IAFM over-compensates with significant numbers of frigate arsenal ships (FMG-150).

Only 10 SSBNs are included.  This should permit 4-5 to be on station at any time.

The SSKs are roughly equivalent to the new, enhanced Soryu-class in the JMSDF, the Taigei-class.  They do NOT use Air Independent Propulsion (AIP). Instead they rely on a larger stack of advanced lithium-ion batteries.  This gives the Taigei-class far more available submerged power before they have to recharge their cells. 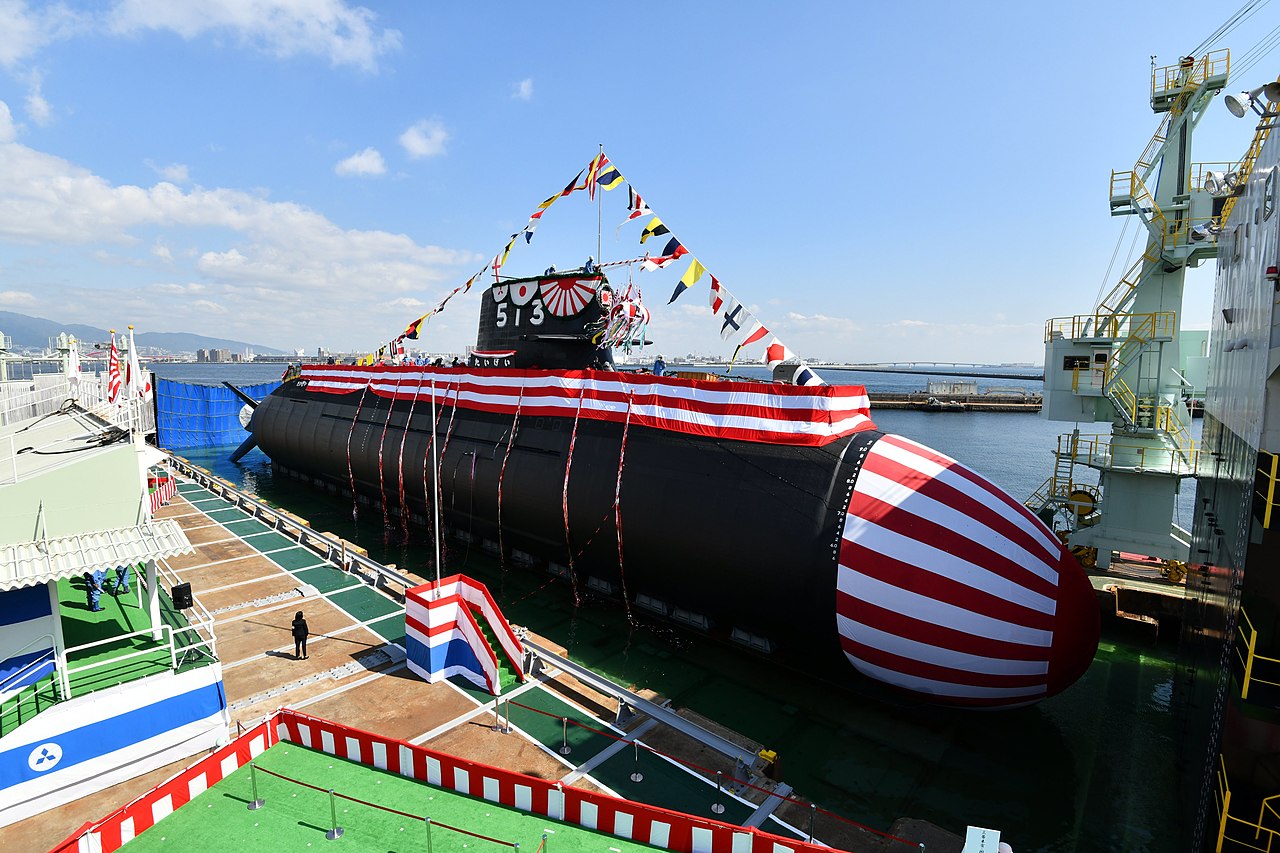 Most SSKs would be forward based in the Pacific to reduce transit times and increase operational availability.  Some would be held back in the US to form "aggressor" teams for ASW training.

The IAFM's three large surface combatant classes and the CVL-150 are based on a common, 15,000-20,000t, Surface Combatant 150 (SC-150) design and family of systems.  The CG is a AMD cruiser with a large AMDR radar.  The FPD is a hybrid LPD with well deck and guided-missile frigate systems taken from the FFG(X). The FMG is an arsenal ship with the same guided-missile frigate capabilities.  These hybrid ships allow the IAMF to retain a significant number of escort-capable vessels while still offering the unique capabilities of LPD- and arsenal ship-style vessels.

The LCK is a "Littoral Combat Corvette" in the 2-3,000t range.  Emphasis on long range and endurance, as well as shallow draft, over speed.  The C Sword 90 is an example.

These ships would be forward based around areas such as the Persian Gulf, the South China Sea, the Baltic Sea, in areas close to land.

The FFG is the forthcoming FFG(X) Constellation-class frigate.  This ship will be used to develop and prove systems like SPY-6(V)3 EASR and COMBATSS-21 which will be carried forward as the primary combat systems of the FMG-150, FPD-150 and CVL-150 classes.

The MDOMV is an optionally-manned USV somewhat larger than the Sea Hunter MDUSV, with the ability to carry a small crew (10-20).  The Thales TX Ship Concept is my current favorite in this category, but one of the fast crew vessels the Navy is investigating may also be suitable.  The optional crew provides more resilience in the case of system failures and allows the MDOMV to be used as a patrol vessel as well as MIW, ASW and ISR, when so configured. 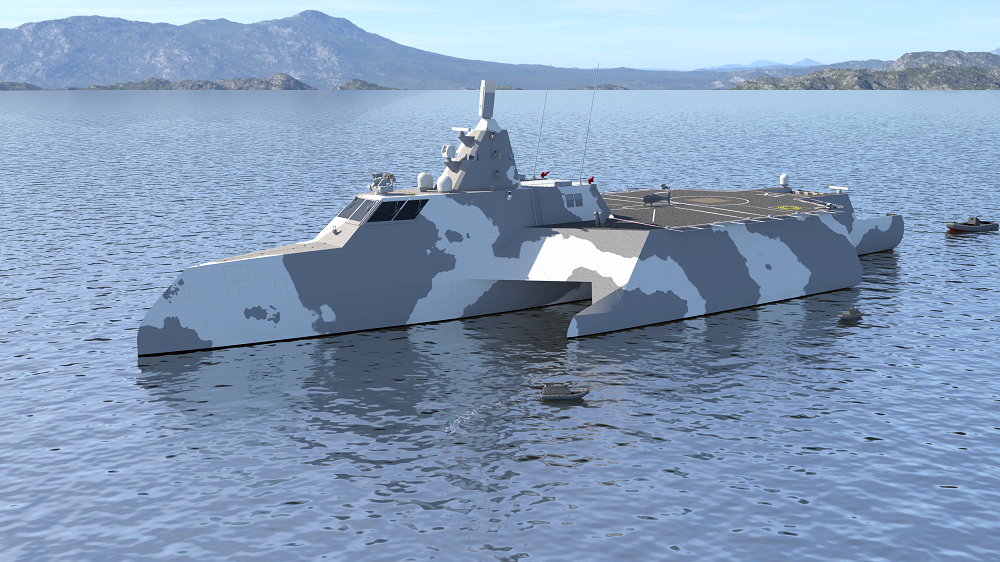 These MDOMVs should have sufficient range and speed to operate with task forces and should be able to replenish at sea, when crewed. 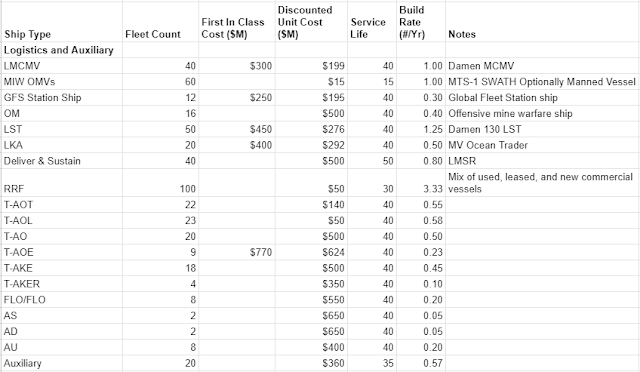 A wide variety of logistics and auxiliaries are included in the IAFM.  Many of the ideas and numbers are taken from the CSBA's report entitled, "Sustaining the Fight: Resilient Maritime Logistics for a New Era".   This is an area of the IAFM that still needs more work.  I'm not sure if the CLF components are sufficient.  I only include 9 T-AOEs, so around half of the CV55s will have to operate without a dedicated AOE.   Ideally I'd like to have one per CVBG.

Some notables include forty dedicated MCMV vessels like the Damen MCMV. 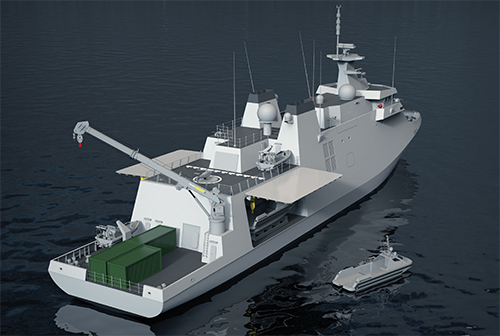 These ships provide the core of the IAMF's mine hunting capability, but are heavily augmented by MCM packages carried by FPDs, LSTs and LKAs.
The IAFM includes sixty smaller MIW Optionally Manned Vessels as part of these MCM packages.  I use the MHS-1 as a starting point for this.  "Naval Mine Warfare Operational and Technical Challenges for Naval Forces" from the Naval Studies Board detailed the concept and its use.

The IAFM includes sixteen Offensive Mine warfare ships.  These are commercial conversions designed to carry and deploy hundreds of Unmanned Mine Delivery Vessels (UMDVs), which are small, inexpensive Low Profile Vessels (LPVs) that use inexpensive commercial motors and fiberglass construction.  They are designed to carry 1-4 mines up to 2,000lbs up to 700-1,000 nmi at 20kts and deploy them autonomously.  Upon deploying, they scuttle themselves to add clutter to the bottom of the sea, complicating mine hunting.  Each Offensive Mine Warfare ship carries up to 500 of these UMDVs and are organized in four squadrons of four ships.  Two squadrons would remain on station outside the first island chain constantly.  In the event of war, they could launch all 4,000 UMDVs at once, or over a period of time as they transit north and south.  The goal of such swarms of mine dropping USVs is to cripple critical Chinese ports early in a conflict.   China has 34 major ports along its coast, and many minor ports.  Each port could receive up to 100 UMDVs.  Given their 1-2 day transit time, some may be lost along the way

The IAFM includes a dedicated Global Fleet Station (GFS) ship.  I know this concept is passé, but the underlying premise is still valid.  We can't just ignore the rest of the world while we pivot to Asia.  Twelve dedicated vessels will permit frequent and enduring contacts with countries around the world that may not rise to the level of concern or importance to warrant a warship or task force visit.  These ships can economically enable USAID, DoS, and NGO operations that can increase regional stability, as well as fostering government-to-government and military-to-military contacts that may not otherwise occur.

These ships aren't meant for normal forward presence of Marine forces, though they can be used for this.  They are intended to form the core of a "break glass in case of amphibious assault" reserve force capable of moving multiple brigades worth of Army AABCT or Marine forces in a single assault.   Fifty LSTs and twenty LKAs could carry three AABCTs with room to spare.

I include a major recapitalization of the Ready Reserve Fleet (RRF), 100 ships, with a mixture of new buys, long term leases, and used ships.  The RRF is a critical resource that we call upon whenever we need to bulk up our shipping and logistics, but the current RRF fleet is extremely old. Exercises to call up these ancient ships have been fraught with problems.  Only 40% were able to steam out of port when called up.
Alternative Defense Strategies Amphibious Assault IAFM Navy NNFM