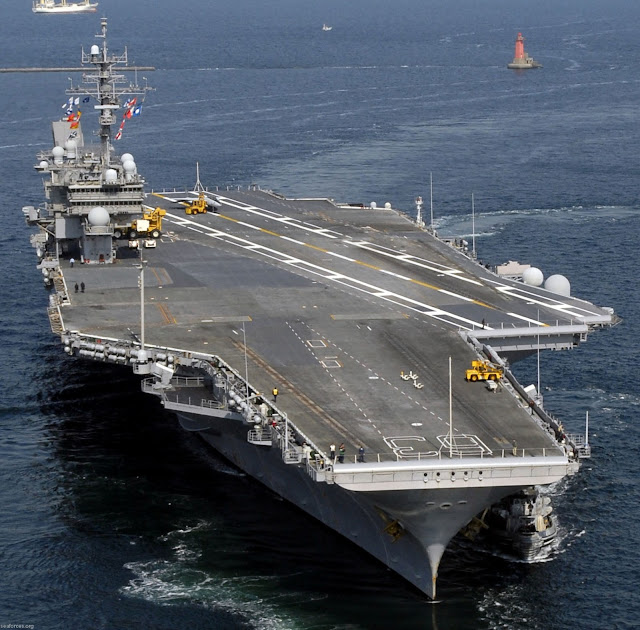 
Every few years, there's an effort to revisit the design of the US Navy fleet in light of changes in technology, geopolitics, and budget realities.  I decided to take a stab at a fleet design myself. As part of this effort, I reviewed a number of recent fleet designs from the Navy and various think tanks.

Obviously, with this type of exercise there's a healthy chance of "garbage in/garbage out".   I attempted to apply my cost model equally and impartially, to all fleet designs studied, but some subjectivity is inevitable.  The costs of non-existent ship designs is highly subjective.  This has a major, downstream impact on the overall fleet numbers and design.

I developed a pricing methodology that attempted to take into account ship construction costs, O&S, manning, munitions in VLS cells and aircraft.

I used a planning budget that roughly corresponds to the cost of the Navy's "355 fleet" using my pricing methodology.

I compared a number of studies while researching the IAFM.  Several notable among them include,

The New Navy Fighting Machine describes a fairly radical redesign of the Navy with changes including,

The NNFM SCN design budget was $15 billion SCN per year, which produced an aggregate total cost of $77B/yr using my model.  This is significantly lower than the other studies.

For comparison purposes, I include the original NNFM with tweaked unit costs to match similar classes in other fleet architectures.  I also included a a scaled-up NNFM, for direct comparison with the other, more costly, force models.  To scale up, I simply multiplied the original NNFM unit counts by a common factor until the total costs were similar to the other designs.

I'm sure, if given a higher budget, the original NNFM team wouldn't scale the original design this way, but I didn't want to speculate what they might do.

The CSBA also came out with a later study on the combat logistics fleet. I used some of their CLF ideas in the IAFM.

In 2016, the Navy developed its own future fleet architecture study. It took a 15-year plan to develop a Distributed Fleet by 2030.

From the "Navy Force Structure and Shipbuilding Plans: Background and Issues for Congress".

On December 15, 2016, the Navy released a force-structure goal that calls for achieving and maintaining a fleet of 355 ships of certain types and numbers. The 355-ship goal is the result of a Force Structure Assessment (FSA) conducted by the Navy in 2016. An FSA is an analysis in which the Navy solicits inputs from U.S. regional combatant commanders (CCDRs) regarding the types and amounts of Navy capabilities that CCDRs deem necessary for implementing the Navy’s portion of the national military strategy, and then translates those CCDR inputs into required numbers of ships, using current and projected Navy ship types. The analysis takes into account Navy capabilities for both warfighting and day-to-day forward-deployed presence.1 The Navy conducts an FSA every few years, as circumstances require, to determine its force-structure goal.

Takes the approach of recommending a 15 year plan to modify the fleet.  Does not  consider a wholesale redesign.  As such, they didn't produce a full fleet architecture, so I just include them here for reference.

The Heritage Foundation comes up with a military index every year as well as recommended force levels.

Rep. Banks, “As the Navy reassesses their 355-ship plan, the Department of Defense must think strategically about global maritime threats. It is clear to me that at least 400 Navy ships are required to achieve strategic success to address the challenges outlined in the National Defense Strategy. The President and Congress need to act quickly to prepare our Navy for a great power competition against technologically advanced enemies.
“A larger Navy will require a serious investment in the American industrial base to give our military the fleet of warships it needs to win the naval battles of tomorrow.  According to a September 2018 White House Study, ‘Industries involved in the manufacturing of shipbuilding components were among the hardest hit by the global shift in the industrial base over the last 20 years.’ We must support our industrial base with innovative technological capabilities to adapt to the future requirements of the force.
“The Five Ocean Navy Strategy encourages the Department of Defense to strengthen our shipbuilding program to address our aging Navy, and the global strategic challenges posed by adversaries both near and far.”
Likes
Dislikes

Replaces large carriers with LHA-derived CVLs  to pay for more submarines, USVs and UUVs.  Given that the exact architecture has yet to be released, I just estimated based on the mid point, when there was a range of ships numbers.
Likes
Uncertain

Hudson: American Sea Power at a Crossroads: A Plan to Restore the US Navy’s Maritime Advantage

Again, YMMV here.  I had to guess about details of some of the fleet designs, especially their CLF and Sealift components.  The Interested Amateur Fighting Machine (IAFM) is included at the end. 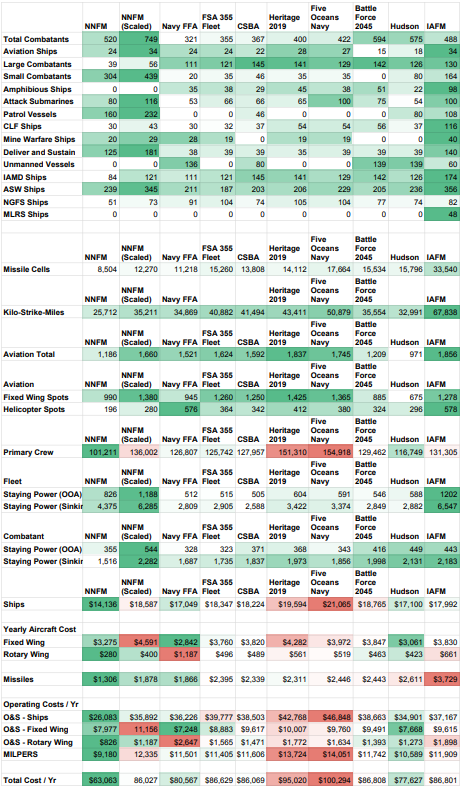 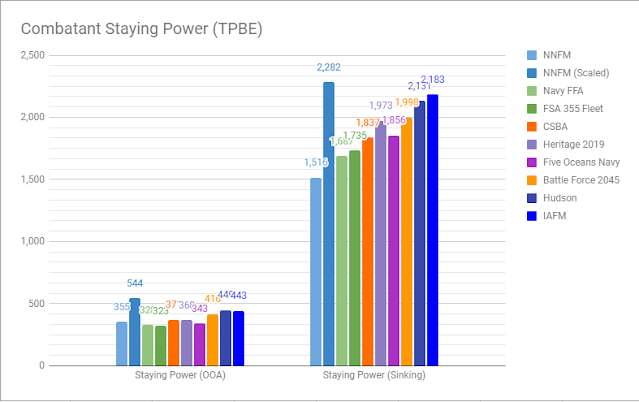 The less expensive Hudson fleet does well here, owing to its large number of small combatants.  The scaled NNFM fleet does the best for the same reason.  The IAFM does well too, partially due to the larger size of its main combatants (SC-150). 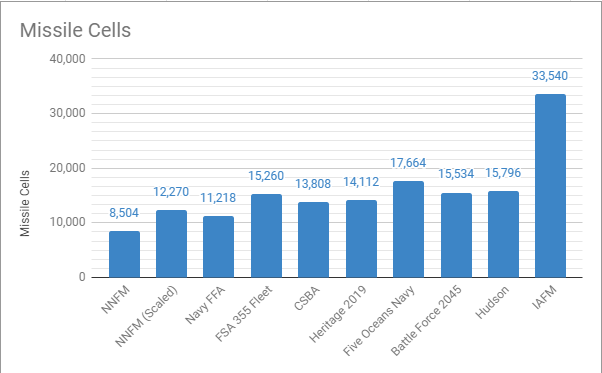 The IAFM wins by a landslide in the number of missile cells category.  All those FMG arsenal ships really add up. 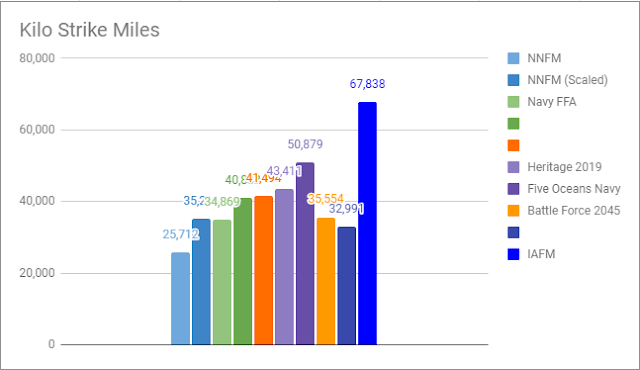 This also shows up in the total Kilo Strike Miles each force can generate. (1 KSM = 1 x 1,000lb warhead delivered 1,000 nmi)  Heritage gets a major KSM boost from having the largest fixed-wing component.

The IAFM fleet has far more instantaneous firepower available to it as a result of the largest number of missile cells.  It is competitive in all other metrics, though certain architectures (Hudson, NNFM) are designed to a lower cost baseline.