Much has been written on the Chinese A2/AD bubble.  It's clear from the literature that operating outside the first island chain is not as safe as it used to be.  There are a multitude of air, sea, subsurface and ballistic missile threats. 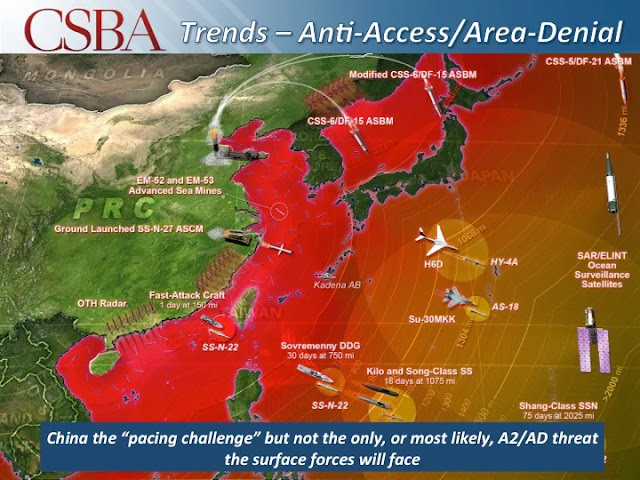 The threats grow in number and variety the closer you get to the Chinese coast. ASBMs, surface-delivered AShMs, submarines, and air-delivered AShMs from long range bombers and fighters like the Su-30MKK all contribute to this dilemma.

In addition, gaining and maintaining air superiority over Taiwan and other areas inside the first island chain will be increasingly difficult.  US and allied air forces in the region will likely be outnumbered at the beginning of a conflict, so maximizing effectiveness of every aircraft and every sortie will be paramount.  One key force multiplier in any air war is advance Airborne Early Warning (AEW).  The earlier you can detect enemy aircraft and missiles, the better your chance of defeating them.

Currently, the US has two AEW aircraft in service, the USAF E-3C Sentry and the Navy E-2C/D Hawkeye.  Both are based on dated aircraft designs, with limited range and service ceilings.  Given that our close in bases along the first island chain (e.g. Kadena, Okinawa) will likely be subject to significant air and ballistic missile attacks, we will need to rely on carrier based AEW and aircraft flying from bases further out.  This will place more significant demands on our aerial refueling fleet.

What's needed is a land-based AEW aircraft with greater range, service ceiling, and speed to get from far away bases to their operating area faster.

The G550 CAEW was originally built for the Israelis to house their Phalcon L/S-band AEW radar system.

If we established bases on the Australian Christmas Island and Palau, along with Guam, E-37 AEWs could cover most of the South China sea and Taiwan region with modest air refueling support to extend their mission endurance.  Exploiting Christmas Island also enables AEW and maritime surveillance over the Strait of Malacca and alternate shipping lanes in that region.  In the event of a conflict with China, cutting off these shipping routes to China may be critical. 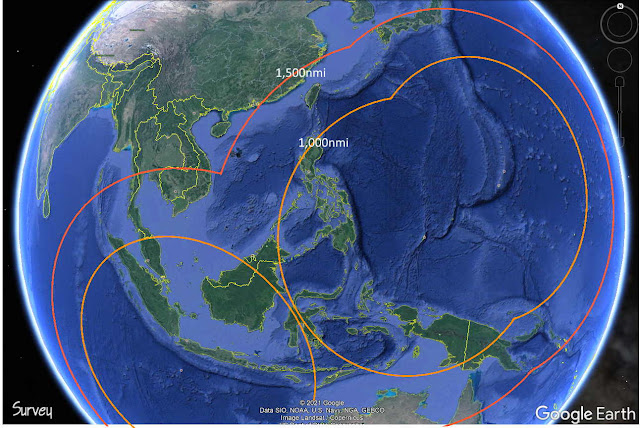 Obviously using bases closer in would allow for greater endurance and even less air refueling, but these three islands are on the outskirts of the Chinese A2/AD zone, affording them some protection from attack.  Base hardening and air defenses are still prudent measures.

Land-based, Airborne Early Warning, without over-straining our tanker fleet, enables smaller surface task forces, such as CVL-based task forces in the IAFM, to operate independently without having to develop clunky and limited VTOL AEW aircraft.

The radar is the heart of any AEW aircraft.  Options include license building the already-integrated Israeli IAI EL/W-2085 Phalcon radar.  However, it probably makes more strategic sense for us to develop our own system.  Adapting the Northrop Grumman L-band MESA radar from the Australian Wedgetail program may make the most sense, as it's in service already.
However, another option would be to develop a fully AESA variant of the E-2D's APY-9 UHF-band radar.  The current APY-9 is a hybrid mechanically- and electronically-scanned array.   The primary benefit of this option is the APY-9's stealth detecting properties.  UHF-band is difficult for fighter-sized stealth aircraft, such as the Chinese J-20 and J-31, to optimize against.
Using the E-2D's combat systems brings along Cooperative Engagement Capability (CEC) via the E-2D's NIFC-CA data link system.  This allows surface combatants to use E-37 AEW's targeting data to fire long ranged surface to air missiles like the SM-6 from over-the-horizon.
Developing an S-band AESA radar for the nose and tail cones of the CAEW rounds out 360 degree detection, and potentially allows handoff of UHF band detections to S-band higher-resolution tracks.
Both radars can also detect and track surface ships and sea skimming missiles.
Flying at a normal operating altitude of 41,000 ft, the E-37 AEW's radar horizon is 50-60 nmi further than an E-2D flying at 25,000 ft.

Robust Airborne Early Warning is vital to the prosecution of any conflict.  Small, Distributed Lethality task forces lack organic AEW. This is also an often-leveled critique of light STOVL carriers.   A long-range, land-based AEW aircraft operating from regional bases can offset this limitation, reducing the impact on our always-strained air refueling fleet and enable Distributed Lethality task forces.  The Gulfstream G550 has already been adapted for use as an AEW and electronic warfare aircraft and variants are in use by the US military.  Either the Navy or USAF could develop an AEW variant, and fly them from bases at the fringe of the Chinese A2/AD zone.