While considering the role and missions for the IAFM light carrier (CVL-150), incorporating UAVs into the air wing appeared to offer a lot of opportunity.   UAVs can hit combinations of size, signature, endurance, and price that are hard to match with manned aircraft.  And, obviously, if they're shot down, you don't lose a pilot.

The primary "economy of force" missions for the CVL are,

Many of these missions are slow and time consuming and would be greatly enhanced with a long-endurance aircraft.  Recently General Atomics demonstrated their MQ-9B SeaGuardian dropping sonobouys and processing results.  The Hudson Institute developed an ASW concept of operations for MALE UAVs in their work entitled "Sustaining the Undersea Advantage: Disrupting Anti-Submarine Warfare Using Autonomous Systems".  They envisioned land-based UAVs backing other fixed and unmanned sensors to cover chokepoints.  In the IAFM, CVL groups would augment these land-based assets with naval variants of these MALE UAVs.  The CVL is large enough to carry a substantial stock of sonobouys
For Sea Control and Distributed Lethality Scouting, a MALE UAV would be the primary wide area search asset for the CVL group to detect and identify maritime traffic and potentially hostile surface vessels.  This is commonly performed by land-based MPAs and Triton UAVs, which are few and whose bases may be attacked early in a conflict.  For independent task forces this is also performed by surface combatant helicopters and UAVs like Fire Scout, however these have limited range, endurance and speed.  This restricts the area around the task force they can search.  Also surface combatants only carry a handful of aircraft (1-3), and gaining and maintaining a surface picture will compete with other tasks like ASW.
For overland CAS/COIN/ISR and Marine Aviation Support, the advantages of MALE UAVs have been proven many times over with Air Force Predator and Reaper aircraft.
Mine countermeasures is not an obvious mission for a MALE USV, but keeping tabs on enemy movement of mines, as well as observing minelaying ships, are two obvious uses.  The AN/DVS-1 Coastal Battlefield Reconnaissance and Analysis (COBRA) shallow water minehunting payload could be adapted for use on this UAV.
HA/DR support is another obvious mission for MALE UAVs.  Often the first task in a DR mission is to assess the situation, and for this, airborne reconnaissance imagery is invaluable.

Back in the day, the short takeoff OV-10 Bronco used to take off from LHAs, and obviously propeller aircraft used to fly all the time from tiny CVEs.  So why not make a STOL UAV that can use a relatively light weight arrestor wire on landing?   STOBAR - Short Takeoff, But Arrested Recovery.
The OV-10 didn't have an arrestor hook, so landing on a carrier or amphibious ship was a risky proposition.  However a STOL aircraft certainly could include an arrestor hook.  Assuming the UAVs were relatively light weight, with a low landing speed, the CVL arrestor system wouldn't have to be all that robust.  The OV-10 had a landing speed of only around 60kts and a max weight of around 14,000lbs.
I didn't see a lot of STOL UAVs out there on the market.  Most are either normal CTOL aircraft or use a custom launch and/or recovery system.  The Elbit Hermes 450 (Thales Watchkeeper) is a pusher prop MALE UAV that incorporates an arrestor hook for short field recovery.  This aircraft is a bit too small and light for the range of missions I envision, but it's on the right track.
The obvious option is to let General Atomics design a clean sheet, STOBAR UAV, using components from Predator, Gray Eagle, and/or Reaper UAVs.  Perhaps a more robust Reaper fuselage, with lower aspect ratio, shorter, folding wings, and stronger landing gear.  This would trade away loitering endurance for ship compatibility.   A more powerful engine may be required to support ski-jump STOL takeoffs.

An arrestor hook may be a tricky proposition with the pusher prop.  The design would have to ensure the cable and hook couldn't bounce up and foul the prop.  However, as shown above with the Hermes 450/Watchkeeper, it is clearly doable.
With the Reaper communications architecture, the CVL could either host Ground Control Stations itself, or pass them off to CONUS-based GCSs using remote-split operations.
Ideally these "Naval" Control Station (NCS) would also be used by STOCAVs flying from the CVL.
Common Reaper armament includes JDAMs, Laser Guided Bombs and Hellfires.  The STOBAR UAV adds Light Weight Torpedoes (LWTs), mines, and small anti-ship missiles.
Multiple podded payloads are under consideration or in active development for the Reaper.  Variants could be adapted for the STOBAR UAV. 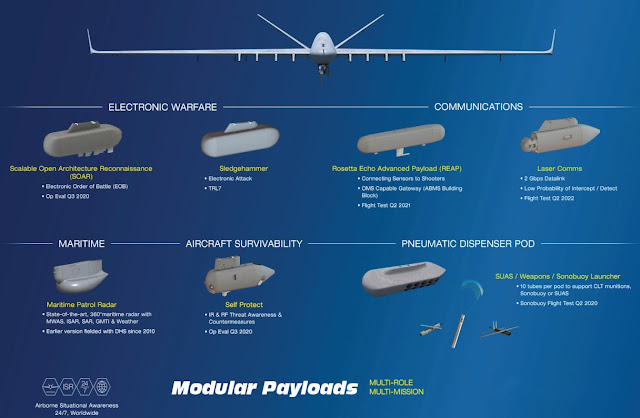 Core sensors include a maritime radar like the Leonardo Seaspray AESA radar, as well as the EO/IR/Laser sensor ball like MTS-B from Reaper in the nose.
Either a podded or integrated Magnetic Anomaly Detection sensor could be included, to aid in submarine localization.
Unlike the Reaper, which typically operates above 15,000 ft altitude, the STOBAR UAV needs to be agile and flexible enough to fly lower to drop sonobuoys and torpedoes.

STOBAR UAV on the CVL

Assuming folded dimensions of around 11m long and 5m wide, the STOBAR UAV has a spot factor of around 0.88 (where 1.0 is a Marine CH-46).  Assuming CVL-150's maximum number of spots is around 40, an ASW/CAS/COIN/ISR-configured CVL-150 could carry the following,
If we stick with the Air Force definition that a persistent "orbit" requires four Reapers, the CVL-150 could provide four persistent orbits, or fewer orbits and more reactive sorties, or more frequent aircraft changes to replenish sonobouy dispensers.

A modestly-priced, STOBAR MALE UAV with reconfigurable mission bay and hardpoints complements the stealthy STOCAV, and rounds out the CVL-150's air wing with a persistent airborne sensor and weapon platform.  In day-to-day use, the STOBAR UAV will be the most used aircraft in the CVL's air wing, especially in peacetime.
Alternative Defense Strategies IAFM Navy NNFM