In it, they enlisted the American Enterprise Institute (AEI), the CATO Institute,  Center for a New American Security (CNAS), and the Center for Strategic and International Studies (CSIS) to weigh in on alternative strategies and force structures for the US Military.

Each team presented a set of force level changes for each service, and the CSBA compared them to the current baseline plan.

For the Army, most teams significantly cut the number of Infantry Brigade Combat Teams (IBCTs) in the force model. 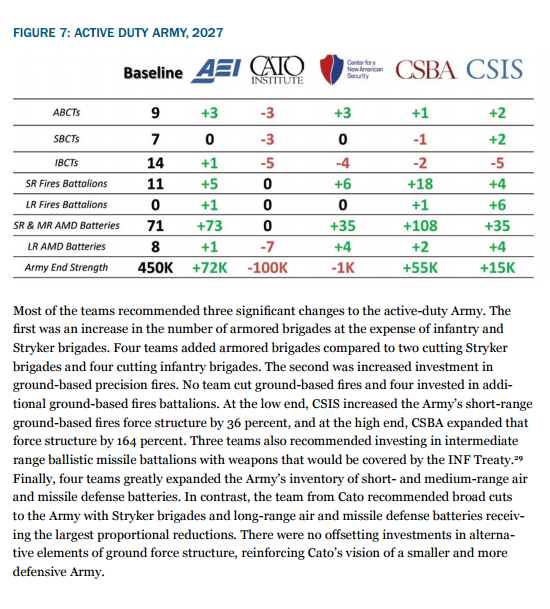 Most also increased the number of heavy ABCTs, reflecting their renewed emphasis on conventional conflicts.

However, if we look at the resulting structures, IBCTs still comprise a significant portion (9-12 IBCTs out of ~30 total) of the overall Army force model.

So I got to thinking, what can we do to make these units more strategically relevant?


As seen in red, IBCTs are primarily foot-mobile.  They have a limited number of vehicles, primarily for movement of heavy weapons, logistics, and equipment.  They also have far less protection and firepower than SBCTs or ABCTs.

So how do we improve this, without eliminating the benefits of strategic deployability and without breaking the bank?

The IBCT's limits are primarily in tactical mobility, protection and firepower.


During the wars in Afghanistan we produced a large number of Mine Resistant Ambush Protected Vehicles (MRAPs).   Eventually we settled on the Oshkosh M-ATV as our primary MRAP, producing over 8,700 for the various services.

With the wind-down of these wars, many of these vehicles are being sent back to Oshkosh for reset and upgrades.  The Army alone intends to keep over 5,600.

Oshkosh has continued to produce new models, including Ambulance, Mortar and Assault variants.

As part of the refurbishment/reset process, let's take the M-ATVs we have and convert them to a set of vehicles suitable for permanent issuance to some or all of the non-airborne IBCTs.

Convert some of our current short wheel base variants to the long wheel base Assault, Ambulance and Mortar vehicles.  This would obvious require a more extensive rework, but since most of the components are the same, it should be significantly cheaper than buying new vehicles.

The Assault variant can serve as the IBCT's wheeled APC.  Call it an M-APC (MRAP Armored Personnel Carrier).

Yes, M-APCs will be less mobile and and less well protected from direct fire than a Stryker or Bradley, but we aren't trying to duplicate the SBCT.  We're trying to improve the firepower, protection and mobility of the existing IBCTs at a much lower cost.

The IBCT battalion organization can morph to something more like the SBCT battalions, with the Weapons Company providing drivers and gunners for the M-APCs.


Each M-APC can carry an Objective Gunner Protection Kit (OGPK) turret, housing up to three weapons.

These weapons can include a .50 cal M2 machine gun, a 40mm Mk19 Grenade Launcher, or a 7.62mm M240 machine gun.  There's even a variant that can carry a TOW missile launcher.

The addition of up to 14 x .50 cal and Mk19 grenade launchers per IBCT company greatly improves its firepower over just a handful of M240s and 60mm mortars.

Additional Javelin launchers can be carried to provide anti-armor capabilities.

Clearly, adding a bunch of 14-16.7 metric ton vehicles to the IBCT will reduce its strategic deployability... assuming you bring along the unit's organic vehicles.

The IBCTs can train at home with their organic equipment set.  When it's time to deploy, they can rapidly move via airlift without vehicles, and fall in on an IBCT vehicle set delivered to a local, friendly port via pre-positioned RoRo.

Each SBCT requires around 330 Strykers.  Assuming the same number of M-ATVs are required per IBCT, we could convert the planned stock of 5,600 M-ATVs into up to 16 IBCT sets.

If we convert half of the baseline IBCTs (seven out of 14) to this new organization, we could convert/purchase an additional seven IBCT sets to preposition near potential hotspots around the world.

The remaining seven IBCTs can maintain their "lightness" and/or airborne qualifications for those rare situations where we actually need an "LBCT".

The USMC is moving away from large-scale amphibious assaults towards smaller, battalion-and-below formations and EABO.  However, the US Military may still find itself in need of performing such an assault as part of a broader forcible-entry operation. What’s needed is a “relatively” inexpensive way to land a large, mobile, armored force in short order.   So how about give the large-scale amphibious assault mission to the Army?  Switch three IBCTs (roughly a division) over to an Amphibious Assault Brigade Combat Team (AABCT), an organization mirroring the SBCT, but replacing the ~300 Strykers with the USMC ACV. USMC ACV with 30mm Remote Turret SBCT Organization ( CBO ) SBCT Organization Pg 2 In this way, existing, land-based SBCT doctrine and training could remain the same.  The AABCT can be used in more or less the same ways and same situations as an SBCT.  ACVs are somewhat heavier and larger than Strykers so the logistics elements in the SBCT will need a bit of a bump. Outfitting the
Read more
Visit profile